Go back to convention home page 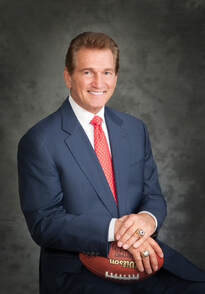 Wednesday, Apr.6, kicks off with a welcome reception where our keynote speaker, former NFL star, Joe Theismann, will speak on How to be A Champion Everyday.

Joe Theismann is an entrepreneur and the former star quarterback for the Washington Redskins.  Most recently, he spent the last 2 decades working for ESPN and the NFL Network as an NFL analyst.

Joe graduated in 1971 from the University of Notre Dame, where he received All-American honors in both Football and Academics.  That same year, he was runner up to Jim Plunket for the Heismann Trophy balloting.  Joe chose to begin his career with the Toronto Argonauts of the Canadian Football League after being drafted by the Miami Dolphins and Major League Baseball’s Minnesota Twins.

A 12-year NFL veteran, Joe played in 163 consecutive games from 1974-1985 for the Washington Redskins and holds Redskin records for passing yardage (25,206), completions (2,044) and attempts (3,602).  He was a two-time Pro Bowl selection and Pro Bowl MVP leading the Washington Redskins to a 27-17 victory over the Miami Dolphins in Super Bowl XVII.

Joe was selected as the NFL’s Man of the Year in 1982 for his community service and dedication to the health and welfare of children.  In 1983, he won the league’s Most Valuable Player Award, leading the Redskins to a second consecutive Super Bowl appearance.  Joe Theismann’s career ended abruptly in 1985 after sustaining a badly broken leg during a Monday Night Football game against the New York Giants on national television.  In 2003, he was inducted into the College Football Hall of Fame and in 2013 received the Walter Camp Football Foundation “Distinguished American” Award.​

Ryan Englin
How to Get More High Quality People Applying for your Jobs
Ryan Englin is passionate about supporting growing businesses, particularly in blue collar industries, to build amazingly productive companies by hiring the right people. Growing up, he saw his own father working 12-hour shifts and weekends as an owner/operator, witnessing firsthand the struggles that these companies have in hiring quality frontline employees. Ryan was determined to help them find a better way.

His company, Core Matters, provides coaching and training on attracting, hiring, and retaining rock star employees. Using his proven process, the Core Fit Hiring System, small and midsize businesses learn how to start hiring better people, faster. With almost a decade in the business, Ryan has worked with over a hundred clients, helping business owners achieve their goals by hiring the right people.​

Scott Seppers
Common Rigging Mistakes
After working in the construction industry for 20 years and providing training for the last five years, Scott has discovered that there are some very common rigging mistakes that are occurring out on the work site.

Frank Kollman
Contract Clauses: Protecting Your Business From the Unexpected
Rising material costs, supply chain disruptions, Covid, government regulation, and similar problems have become a way of life. Contract language in light of these expected and unexpected events has become more important than ever. While there are many legal principles that allow companies to avoid contractual obligations that were unanticipated, those legal principles can be negated by contractual language.

​The purpose of this presentation is to show you how to avoid that language, propose language of your own that protects your company from unforeseen events, and generally understand the contractual language you want in every agreement. Be prepared with questions.

Project of the Year Panel discussion allows the team members from the award winning projects explore common themes and best practices that other erectors may apply to planning, logistics, safety, and other challenges.